You are here: Home / Our Course / Lesson 9. Chest Wall and Lung Decortication

Preparation of the Lung Decortication Model: 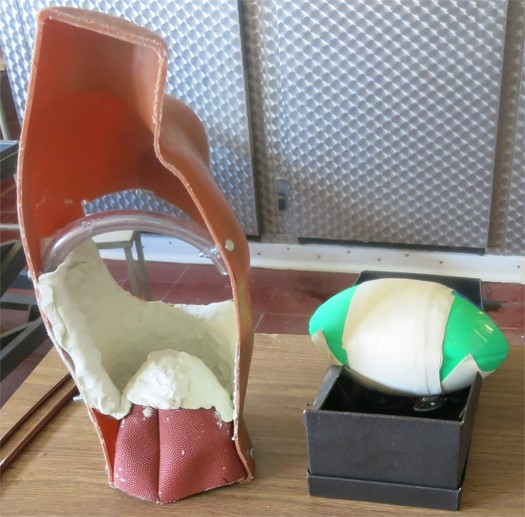 Note: Often in the setting of a late stage empyema, the volume of the lung will be reduced. This will cause the ribs to lie closer together and the diaphragm to lie much higher than usual. Removing a rib using the subperiosteal technique, described in the video from Exercise #8, will often allow room to begin the chest wall decortication by initial blunt finger dissection of the thickened parietal pleura off of the inside of the ribs.

• Often finger dissection of the thickened chest wall pleura in a direction toward the apex of the chest cavity will demonstrate a thinner area of pleural thickening. One can then easily develop a plane between the lung pleura and the thickened tissue resulting from the empyema process. This plane can be extended inferiorly to initiate the lung decortication.

• This will enhance the surgeon’s ability to know how deep to incise the thickened pleura in order to orient himself or herself to the location of the underlying compressed lung, the actual empyema cavity (if present) and the location of the elevated diaphragm – three critical steps in performing a decortication.

1. Begin the chest wall decortication by blunt finger elevation of the layer of clay (the simulated layer of hyalinized thickened pleura) along the inferior border of the thoracotomy incision in the mannequin.

2. Continue medially towards the simulated descending thoracic aorta (see below). Discuss the importance of ending this dissection one centimeter lateral to the aorta in order to avoid injury to the intercostal arteries as they originate from the aorta. 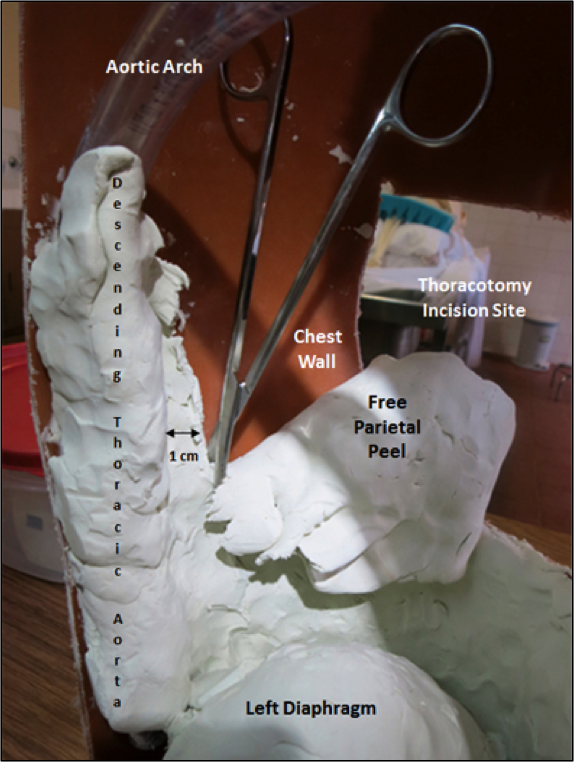 3. Using heavy scissors, divide the “pleural peel” in a vertical fashion one centimeter lateral to the aorta and continue inferiorly down to the level of the inferior margins of the diaphragm anteriorly and posteriorly.

4. Discuss the importance of avoiding decortication of the apical pleura and the mediastinal pleura. Decorticating these surfaces does not contribute to any trapped lung expansion and risks injury to the subclavian vessels, the major pulmonary vessels at the hilar area, the esophagus and the phrenic and vagus nerves.

6. Once this plane has been developed over the apex of the diaphragm, continue the decortication posteriorly and anteriorly until the entire diaphragmatic surface has been decorticated. Remove the thickened pleura that has been dissected free from the chest wall and diaphragm.

1. Using Microfoam-tape covered styrofoam American football, incise the “visceral” pleural peel with the “belly” of the scalpel with shallow cuts.

2. Spread the pleural edges with a curved hemostat after each deepening incision to attempt recognition of the “pleural surface” of the lung (football) before cutting into it (see below). 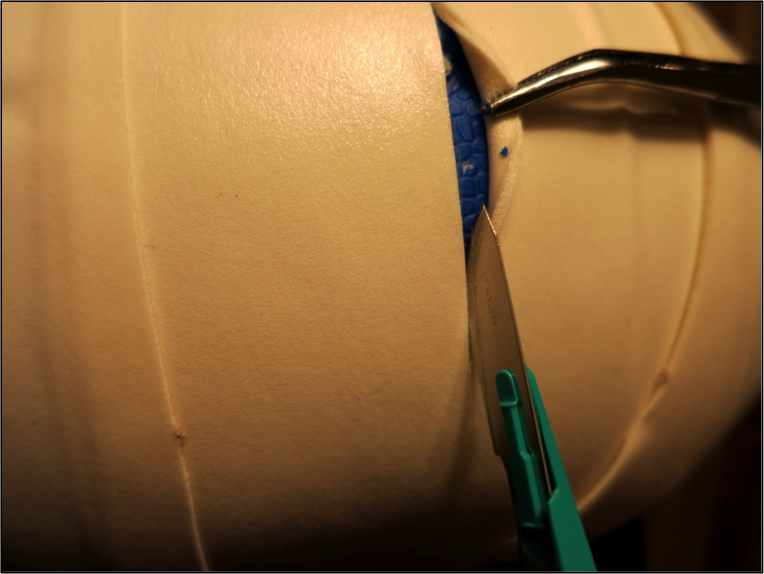 3. Grasp edges of incised pleura with hemostats to assist the development of a plane just proximal to the underlying “pleura”( the layer of clear plastic tape). While assistant holds the hemostats, use Kittner dissectors to advance the plane of dissection. Also use scalpel edge to advance the edge of dissection.

4. Cut off pleural peel that has been freed up from the lung surface.