You are here: Home / Our Course / Lesson 7. Patient Positioning for a Left Postero-Lateral Thoracotomy

1. If using an Operating Room table, remove the head piece and insert at the foot of the table.

2. Tuck in two sheets to cover the table.

3. Place two folded strips of Kerlix across the table just above the “break” with the “open” end of Kerlix facing the future side of the skeleton’s spine. Place “draw sheet” (a sheet folded in half) over the upper half of the table on top of the two Kerlix strips. This will keep the Kerlix from “burning” the patient’s skin when the Kerlix is tightened around the blanket rolls. Fold 2 sheets into two rolls 2 feet long and encircle with 1 inch adhesive tape to form blanket rolls (see below).

5. Position the skeleton in the supine position with the tip of the xiphoid process over the “break” in the table.

6. Place two pillows covered with pillow cases side-by-side under the feet, knees and hips of the skeleton. Cover with a sheet and tuck in to hold pillows in place (see below). 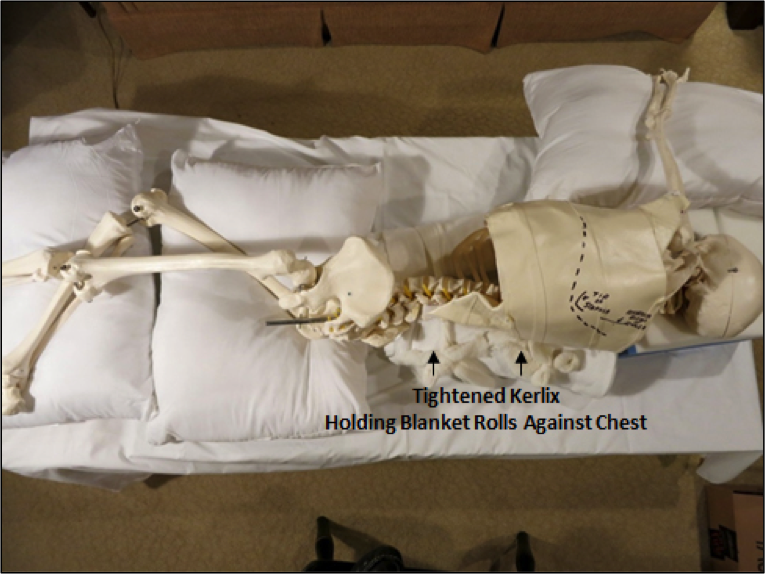 8. Attach padded flat arm board into right side of the table perpendicular to the right shoulder.

10. Pull the two Kerlix ends towards the skeleton’s spine and push the two blanket rolls snugly up against the sternum and the thoracic spine. Tighten the two open ends of Kerlix with a bow to hold in place.

11. Create an “axillary roll” with an IV bag or water-filled rubber water bottle wrapped with a towel (or Chux pad) and secured in place with adhesive tape. If an axillary roll is chosen, ask the anesthetist or anesthesiologist to “flex” the table, then – while an assistant lifts the skeleton’s chest cage with their hands in the axilla – insert the axillary roll just inferior to the assistant’s hands so that the roll lies just below the axilla. Do not place the roll directly in the axilla as this will create pressure in the axillary plexus.

12. Optional alternative to placement of an axillary roll. Tighten the two Kerlix strips against the anterior and posterior surfaces of the rib cage so that the patient’s chest cage is slightly elevated off of the surface of the OR table. This will reduce the pressure on the right shoulder and axilla and thus do without the need for an axillary “roll”. Then ask the anesthesiologist or anesthetist to “flex” the table.

13. Place a foam pad under the head to keep the cervical spine parallel to the OR table and not flexed.

15. Place a foam cushion from the left calf to just below the knee and tape with three inch tape to the table to keep left leg from falling off the table. Make sure you can insert your hand easily between the foam cushion and the patient’s calf to avoid pressure injury to the calf.

17. Place foam padding under the skeleton’s right elbow lying on the flat arm board that has been placed perpendicular to the body.

18. Secure the upper arm in the flexible arm support at a right angle to the body. If the arm is positioned at a greater angle towards the head it will stretch the nerves in the brachial plexus.

19. Place foam padding under the entire left forearm on the arm board with the left elbow just proximal to the arm support.

20. Strap both arms in place with tape around the arm boards.

21. Place a folded blanket across the left hip at the top of the iliac crest and tape with three- inch tape to the table.
Note: It is suggested to perform the next steps after Lesson #8: Performance of a Left Postero-Lateral Thoracotomy.

Repositioning the Patient in a Supine Position after the Lateral Thoracotomy

1. Untape the upper and lower arms from the arm boards to allow the arms to move when “unbreaking” (leveling) the OR table. If they are not released, the change in position when the table is flattened may dislocate a shoulder.

2. Ask anesthesiologist or anesthetist to flatten (unflex) the table.

3. Remove the two pillows from between the legs and remove the blanket across the skeleton’s hip.

4. Remove the axillary roll while an assistant lifts the chest cage with the draw sheet.

5. Untie the Kerlix and remove the blanket rolls from within the Kerlix.

6. Tuck both arms alongside the skeleton and, using the “draw” sheet with an assistant’s help, turn the skeleton into the supine position.